What’s the Difference Between Armalite AR-10a and AR-10b Rifles?

Neither family of firearms will function correctly with the other family’s magazines. The AR-10B magazine is based on the magazine of the famed M-14 rifle. This magazine was adopted during the “Assault Weapons Ban,” during which new Waffle magazines couldn’t be legally produced. The AR-10B magazine has proven to be as supremely successful in the AR-10B as its predecessor was in the M-14, and ArmaLite will continue to offer it.

Armalite has tested, recommends, and ships polymer Magpul 308 PMAG® 20LR magazines with their AR-10As. Other similar derivative magazines such as the KAC, M110, and DPMS / Remington 19 round magazines may fit and may function, but Armalite has not tested them, so they can’t assess their reliability. You can purchase extra 308 PMAG®s from Brownells.

Earlier versions of ArmaLite’s AR-10B® magazines were adapted from M-14 magazines. Those magazines incorporated a plunger in the back of the follower who had to be manually pushed to load the magazine.

The new Generation II magazines feature an integral feature on the follower that allows the magazine to be loaded without holding in a plunger. In other words, the new magazine loads exactly like an M-16 magazine. Also, the feed lips and follower were redesigned to improve the reliability of feeding significantly.

As you can see above, the AR-15 and AR-10A Bolt Catches are similar in shape.  However, the AR-10A Bolt Catches are clearly stamped AR-10A.  Additionally, if you look closely at the upper left portion of those two parts, you’ll see significant physical differences between the two. The AR-10B Bolt Catch is very different in shape than the other two.  Note the relatively large flat angled surface near the top of the AR-10B Bolt Catch.

Differences among the three Magazine Catches can be seen in the shape of the boss on the right end of each catch.   (This is the boss that engages the magazine body’s cut out to retain the magazine in the lower receiver.)

The M15 and AR-10B Magazine Catches are similar in design.  However, the magazine catch boss on the M15 Magazine Catch has a chamfer on its lower side (shown in red above), whereas the AR-10B boss lacks that chamfer. 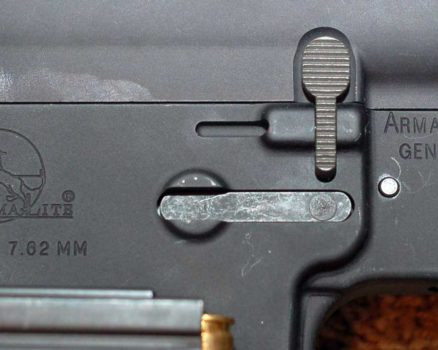